When studying consumer behavior, one common concern is information asymmetry. Information asymmetry exists when one party in a transaction has more information than the other party. This condition becomes especially problematic when pertaining to the quality of a product, such as with experience goods. In these cases, the consumer does not know the true quality of a product until after the transaction has taken place (Akerlof, 1970; Cardebat et al., 2014; Nelson, 1970). As a consequence, when information asymmetries increase, consumers are often guided by expert opinions in their consumption decisions (Flanagin & Metzger, 2013).

This paper will attempt to broaden our understanding of the experience goods market by examining the effect of expert opinion on restaurant pricing. By using the Michelin Guide, one of the world’s leading expert restaurant review sources, this paper will examine if having an award in the Michelin Guide influences the restaurant’s menu prices. This is an important question to investigate as it can allow us to have a better understanding of asymmetric markets and the considerable influence that expert reviews can have on consumer behavior. The restaurant market exhibits a high level of variation in prices. Also, the evaluation of a restaurant involves a high level of subjectivity. Due to these uncertainties, an expert’s opinion may have substantial influence on the consumer.

The present study investigates two research questions. First, what is the effect of having a Michelin star on restaurant prices? Second, what is the effect of earning or losing a Michelin star on restaurant prices? This study hypothesizes that restaurants that are distinguished by experts will charge higher prices than restaurants that have similar characteristics but do not have the same expert recognition. Furthermore, this study hypothesizes that earning or losing this expert recognition will have a similar effect on market prices.

There are a few previous studies that look specifically at the effects of earning a Michelin star on the restaurant market. One of these studies serves as the main inspiration for this paper: Gergaud et al. (2006) studies the effect of expert reviews on restaurant prices in Paris, France. This study concludes that earning a Michelin star in Paris not only generates a price premium for the rewarded restaurants of about 25%, but also generates a price premium for surrounding restaurants in the area of about 5% to 13%. This paper expands upon these results to investigate if there is a similar price premium in the New York City market.

Other studies on the restaurant market have proven that critic ratings have a significant effect on meal prices. For example, Fogarty’s 2011 study on the Australian restaurant market shows that expert reviews from The Age of Good Food Guide and The Sydney Morning Herald Good Food Guide are significant determinants of restaurant prices. The influence of expert reviews has also been studied in markets beyond the culinary field. Examples include studies on the wine market (Ashton, 2016; Cardebat et al., 2014; Dubois & Nauges, 2010; Hadj Ali et al., 2008; Lester et al., 2011), the hotel market (Schamel, 2012), the Cuban cigar market (Livat & Vaillant, 2006), and art auctions (Bauwens & Ginsburgh, 2000; Ekelund et al., 1998). All of these studies support a price premium effect for products that have been distinguished by experts.

3A. Data: The Effect of Having a Michelin Star

The Michelin Red Guide is an annually published hotel and restaurant reference guide. The first edition was published in France in 1900 by brothers Édouard and André Michelin. While the original publications were intended as a road guide for motorists with the aim of increasing the demand for cars, the Michelin Guide gained popularity throughout Europe and eventually began reviewing fine-dining restaurants in 1926 (Michelin Guide, 2017). Today, the Michelin Guide’s star ranking system is regarded as one of the most distinguished and selective determinants of fine-dining status. With publications in over 90 countries, many restaurateurs are mindful of the effect that earning a place in the renown guide can have. Some consider earning a Michelin star to be the highest level of achievement that a chef can earn. In addition, earning a Michelin star is almost always accompanied by a significant boost in business.

The Michelin Guide also indicates other characteristics of restaurants, such as comfort level (on a scale of 1 to 5), whether there is outdoor dining, and whether restaurants take cash only. This paper includes the following controls: cash only, brunch, outdoor dining, notable wine list, notable sake list, notable cocktail list, small plates, and a “more pleasant” symbol that represents “a particularly charming spot with unique décor and ambiance,” (The Michelin Guide, 2010).

The Zagat Guide is a consumer-based restaurant review guide. It was founded in New York in 1979 by Nina and Tim Zagat. The reviews are established “based on public opinion surveys of regular restaurant goers,” with the quantifiable scores representing an average of all consumer reviews (Zagat, 2011). In the 2012 Zagat Guide, 41,604 respondents rated 2,111 restaurants. Furthermore, the restaurants with low response rates are indicated in order to signal less reliable information.

This paper uses four measures of interest from Zagat. First, Zagat lists the estimated cost of a single dinner with one drink and tip included. In addition, consumers rate the restaurants’ food, decor, and service quality on a scale of 0 to 30. The scale is described as follows (Zagat, 2011):

3B. Data: The Effect of Earning or Losing a Michelin Star

The model used to test for the effects of earning and losing a Michelin star is as follows:

This model uses the same critical variables as the first model. However, this model includes time fixed effects in order to control for any changes within the three-year time period. Furthermore, this model includes five interaction variables to individually test for the effects of earning and losing a Michelin star for every star-change combination. For example, the coefficient of (onestar x starincrease) will represent the effect of going from 0 to 1 star on restaurant prices. Due to the small sample size, only (onestar x starincrease), (onestar x stardecrease), and (threestars x starincrease) are used in this study. 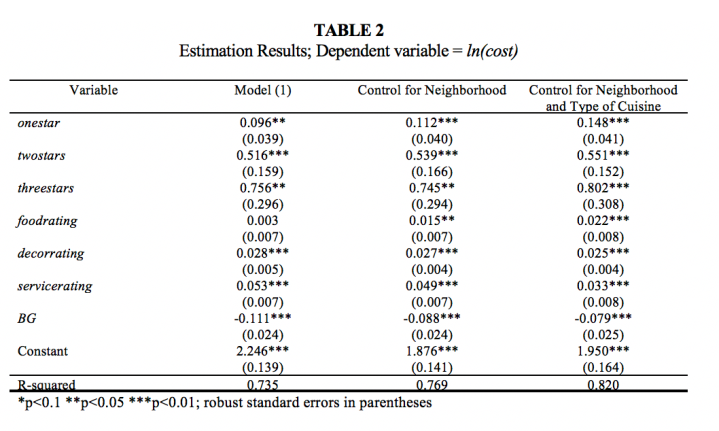 The results of the third regression imply that neighborhood and cuisine characteristics do play a significant role in how restaurant prices are determined. This model shows that some of the other control variables are significant as well. Food rating, décor rating, and service rating all prove to be significant determinants of price. All three of these variables have a positive coefficient, indicating that a one-point increase in rating leads to a positive increase in restaurant price. However, these three effects are relatively small, ranging from a 2.2% to 3.3% price increase. Finally, the Bib Gourmand status is also a significant determinant of price point. Specifically, having a Bib Gourmand award corresponds to a 7.9% decrease in restaurant prices. This finding supports that being recognized by the Bib Gourmand award does signal that the restaurant prices are a “good value,” as claimed by the Michelin Guide. The other control variables, including brunch, outdoor dining, notable wine list, notable sake list, notable cocktail list, and small plates, all showed insignificant results.

The results for Model (2) were insignificant (See Table A3).

The results of this study support that expert opinion does have an influence on market prices. Restaurants that are distinguished by a Michelin star correspond to a higher willingness to pay from consumers. Therefore, these restaurants can afford to raise their prices above those of their competitors. Furthermore, this price premium effect varies depending on the number of Michelin stars that a restaurant has. The price increase for a restaurant with three Michelin stars is expected to be 65.4% higher than the increase for a restaurant with one Michelin star. These results are analogous to those of both the Gergaud et al. (2006) study and the Gergaud et al. (2015) study.

As expected, the results for Model (2) were insignificant. This is due to the data’s small sample size. In order to achieve a significant estimate for this model, more data is necessary. For example, it is possible that including more Michelin Guides in the data set would yield a significant result. This study only uses three Michelin Guides over a three-year time period. Therefore, if the time period were expanded, there would be more restaurants included with observable changes in their number of Michelin stars. Alternatively, this model could be estimated for data from a different location, such as France. There are more Michelin stars awarded annually in France compared to New York City. Therefore, this change in location could potentially produce a significant estimate. These are important considerations to take into account when studying the influence of expert opinion in the future. 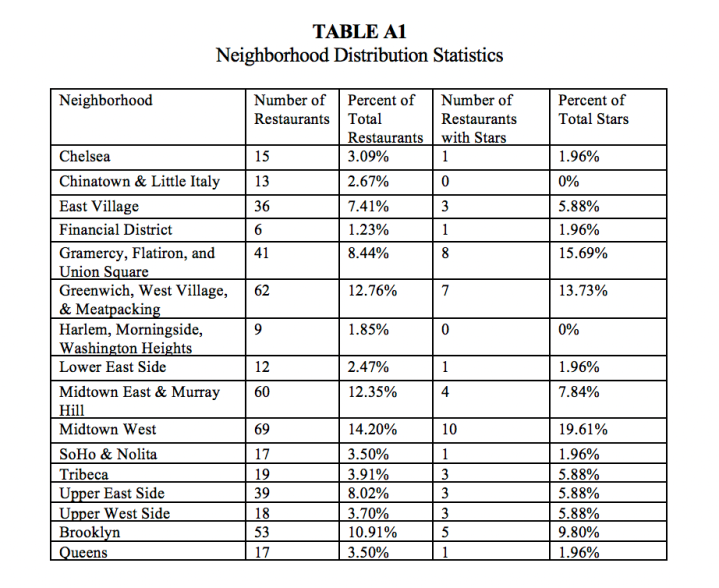 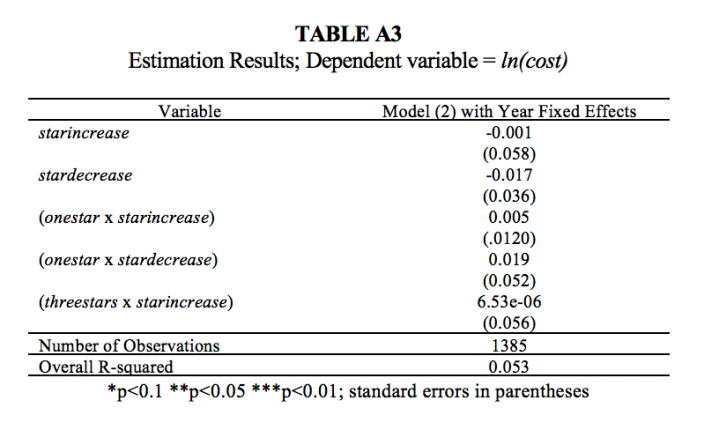 Dubois, Pierre and Celine Nauges. 2010. “Identifying the Effect of Unobserved Quality and Expert Reviews in the Pricing of Experience Goods: Empirical Application on Bordeaux Wine.” International Journal of Industrial Organization, 28(3): 205-212.